Yuri Lennox is a minor supporting character from Aleste and Aleste 2.

Yuri is a bright young woman who was an admirer of the work of Seft Waizen, the creator of DIA51, joining the Earth Defense Organization shortly after meeting him. During her time in the EDO she worked on the same base as Raymond Waizen, eventually becoming his girlfriend.

During the intro of the first Aleste she is gravely injured on an attack by the Mu Plants, being sent to the hospital while Ray fights the plants. She recovers by the end of the game, eventually marrying Ray and giving birth to Ellinor Waizen. 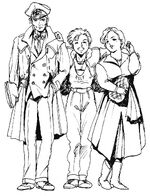 Aleste 2
Add a photo to this gallery
Retrieved from "https://aleste.fandom.com/wiki/Yuri_Lennox?oldid=1502"
Community content is available under CC-BY-SA unless otherwise noted.