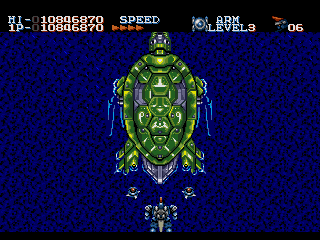 This boss appears as a large turtle shaped vessel. Unlike other bosses this one remains stationery in the middle of the screen, with its retractable head being its weak spot. It has various attacks, such as dropping missiles which revolve around the screen while shooting, releasing spiked balls which do a circular motion, releasing drones which shoot lightning forward or shooting a barrage of bullets.

Retrieved from "https://aleste.fandom.com/wiki/Sub-Gunship_Turtle?oldid=1182"
Community content is available under CC-BY-SA unless otherwise noted.