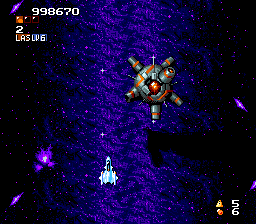 Sentry appears as a mechanical ball with turrets around its body. It appears during the stage, where it tracks down the player for a while before leaving. Once it appears at the end of the stage it bounces around while shooting bullets in eight directions.

Retrieved from "https://aleste.fandom.com/wiki/Sentry?oldid=1206"
Community content is available under CC-BY-SA unless otherwise noted.