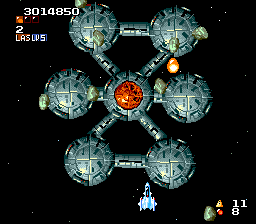 Ruber appears as a group of seven spheres attached to each other. It dives into the background then moves to the foreground, with one of the spheres pointing forward, which the boss then uses to attack. It constantly rains rocks during the fight.

Each of the spheres uses a different attack, including shooting missiles, a large spread of bullets, dropping rocks or raining down bullets. They can only be damaged when opened up. Once the six side spheres are destroyed the player faces the central core, which both drops down rocks and shoots a bullet spread. 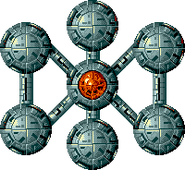 Full sprite
Add a photo to this gallery
Retrieved from "https://aleste.fandom.com/wiki/Ruber?oldid=1230"
Community content is available under CC-BY-SA unless otherwise noted.