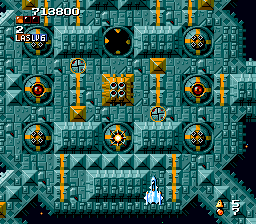 Rono appears as a gigantic space platform. The entire stage is dedicated to fighting it, with the boss moving in the background while the player takes on its many turrets. The actual boss fight begins when the player reaches the center. Full sprite
Add a photo to this gallery
Retrieved from "https://aleste.fandom.com/wiki/Rono?oldid=1203"
Community content is available under CC-BY-SA unless otherwise noted.