Robo Aleste, released in Japan as Dennin Aleste (電忍アレスタ), is a 1992 vertically scrolling shooter video game developed and published by Compile for the Sega CD. Tengen and Sega released the English version of the game overseas in 1993. It is a followup to M.U.S.H.A. for the Sega Mega Drive.

Robo Aleste follows the traditional vertically scrolling shooter style, with the player flying forward and enemies coming from the front, sides, and rear. At the end of each level is a boss, which the player must defeat in order to move on. Each boss is one of the enemy warlords. Like most scrolling shooters, there are several weapons which can be collected and powered up.

The main kunai shot and the three subweapons from Musha Aleste return, joined by new power levels for the main shot and a new subweapon. The sideship system has been completely redesigned: you now have two indestructible units with you at all times, which also fire your subweapons themselves. The ability to give the sideships commands has been replaced with a new subweapon that hits in many different directions. Additionally, the sideships can be launched at enemies.

The Aleste initially starts out with nothing but the main shot and these sideships, and will return to this state whenever the player loses a life. To powerup the main weapon, the player must collect small power chips dropped from a certain type of friendly ship. As more chips are collected, the number of knives in a shot increases (up to four), and eventually the Aleste can start throwing stronger fireballs instead.

The other weapons are subweapons that each have a particular ability and function separately from the main weapon; only one subweapon can be equipped at a time. To collect, switch between, and powerup subweapons, the player must collect one of four colored spheres dropped by another type of friendly ship. Each subweapon has four levels of power, growing stronger and more destructive with each increase in level, obtained by collecting the same subweapon again and again.

It is the later years of the 16th century, and Japan writhes in the agony of civil wars... Brutal, relentless wars that have gone on for years, for decades, for generations. And now war itself has been transformed, made more savage than ever before, with the arrival of electro-mechanical machines of death known as the Dennin.

What are these terrifying engines of death, like men in form but unlike anything but the creations of our most monstrous nightmares in their destructive power? From whence did they come?

In the twelfth year of the Tenbun, or 1543 AD by the calendars of Europe, a single ship - flying the flag of no nation - had drifted ashore on the Japanese island of Tae-ga-shima. Upon inspection, the ship was discovered to be a type of flying gunboat, powered by a steam-based electrical technology that amazed the Japanese. And deep in its hold were found humanoid but mechanical warriors that were frightening to behold even in repose.

These were engines of war never dreamt of by Japan's military engineers. But, inspired to conduct their own research and development, the japanese experts soon came up with their own variations on the lethal technologies hidden within the mysterious ship. They developed their own flying gunboats. And on the model of the mechanical humanoid war machines they created the Dennin, or Robo warriors.

Some 25 feet tall, each Robo warrior is controlled from an interior cockpit by a single man. In appearance, the deadly machines appear to be gigantic men, for they are clothed in the traditional warrior's attire. But on their shoulders are mounted huge turbo-electric engines, the sources of the Robo warrior's power - and their stealth. For it is these great turbines that not only energize the Robo warrior's firepower, but also enables them to fly through the air at incredible speeds, and in utter silence.

In short, these unique new fighting machines combine the most fearsome qualities of traditional Japanese fighting men with firepower and flight capability such as the rest of the world will not employ for another three and a half centuries.

Now it is the year 1556, and the clans hat readily adopted the Robo warrior technology during the past decade have prospered. Those unable to adjust to such revolutionary changes in the art of war have been vanquished and absorbed by their rivals.

In recent years, the Oda clan of the Owari province, led by Lord Nobunaga Oda himself, has relentlessly expanded its sphere of influence through an aggressive combination of warfare and diplomacy. In response, an Anti-Oda Alliance of six clans has united under the leadership of Motonari Mouri of the Chugoku district of western Japan.

Then, in April, Oda's only remaining ally Dosan Saito, lord of Mino province, was assassinated by his own son, the unscrupulous Yoshi Tatsu.

Seizing the moment of Oda's vulnerability, the alliance fielded its united army, known as the Imagawa Force. This mighty force engaged Oda's regiments, under the command of general Shibata Katsuie, near Mikawa. The three-month battle that ensued ended in a crushing defeat of Shibata's army.

Now, as more and more allied forces advance from the north and the west, Oda and his clan find themselves on the brink of annihilation. Their only remaining hope - your only remaining hope is the secret weapon you command: Aleste, for you are Oda's most trusted and valiant officer. long has it been hidden in the obscure little Hakuga village high in the mountains of Sunpu. But now the time has come: time to deploy Oda's innovative new Robo warriors, the Dennin Ninja of Hakuga, led by you at the helm of Robo Aleste.

The order has arrived by courier. Mobilize! Mobilize the Hakuga Ninja! Harass - defeat - destroy the forces of the Imagawa and Mouri - in any way you can! 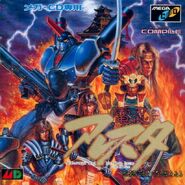 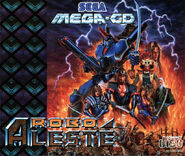 EU cover
Add a photo to this gallery
Retrieved from "https://aleste.fandom.com/wiki/Robo_Aleste?oldid=963"
Community content is available under CC-BY-SA unless otherwise noted.