This game moves from the setting of previous games to a steampunk version of the 1930's, where the player controls the Falcon Flyer and fights against sky pirates.

On a hill overlooking the Mediterranean, a young man lies in the grass. He looks up at the fiery red and gold sky as dawn breaks over the sea. A light breeze rustles through the olive trees. The sound of a propeller engine breaks the silence. He listens as it's joined by a second engine, this one a high-powered custom job.

Two planes appear on the horizon. A cargo plane appears, followed by a small turboprop. The young man whips out his binoculars and looks for the insignia. The cargo plane is a standard B-17, no match for the flyer on his tail. The turboprop dives from 3 o'clock, coming at the cargo plane with the sun behind him, and opens up on it with his high caliber weapons. The left flap looks pretty badly damaged. Another run and the cargo plane is done for.

The young man runs towards a small hangar in the hillside. He's seen the turboprop before. He remembers two years ago. A copilot on a commercial plane. A sky pirate concerned only with looting another victim. The crash. The destruction. Months in the hospital recovering – he was one of the lucky ones. Now, it's time to put an end to the pirates. He's decided it's time to fight back and stop the villains once and for all. The sky is free – no-one will hold it for ransom any more!

Power Strike II plays similarly to previous Aleste games. Like in Aleste 2, the player can pick the starting secondary weapon. By holding the fire button the Flying Falcon will fire both the main and secondary weapons, all while charging energy which can be unleashed by releasing the button. Support ships will bring up P icons to strengthen the main weapon, numbered icons to equip the different secondary weapons, as well as colored crystals which act as a shield, rotating around the ship and giving different power boosts depending on their color. 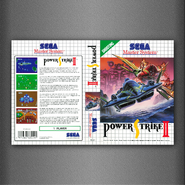 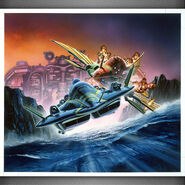