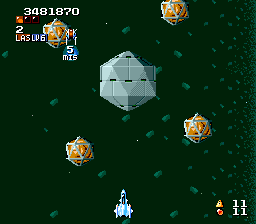 Nonto (ノント) is the eighth boss from Super Aleste. It reappears again in the final stage as a midboss.

Ruber appears as a metallic polyhedron. It is protected by four smaller polyhedrons which spin around it. It initially circles around the screen while dropping triangles. Once its core is exposed its bits start following the player, while the core shoots lasers, bullets and triangles all over the screen.

Retrieved from "https://aleste.fandom.com/wiki/Nonto?oldid=1232"
Community content is available under CC-BY-SA unless otherwise noted.