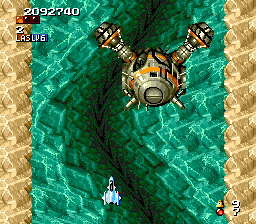 Nardork appears as a digging machine with two mechanical arms. It can only be damaged when the red core on the front is opened. Its attacks include shooting homing missiles, extending its arms to hit the player directly or use them to dig the walls, causing debris to scatter as well as dropping rocks at the player.

This boss returns in the final stage as a midboss, though it can only use the homing missiles and extending arms there due to not having any terrain to dig.

Retrieved from "https://aleste.fandom.com/wiki/Nardork?oldid=1218"
Community content is available under CC-BY-SA unless otherwise noted.