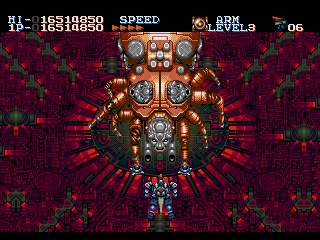 Mechanical Cougar Dennin is the tenth boss from Robo Aleste.

This boss appears as a large spider shaped mech. At first it will move back and forth and shoot from its frontal guns, but it will soon move forward and use its other attacks. It shoots two streams of fire to the sides from the two faces on its body, a barrage of missiles which rain down on the screen creating large explosions, and three lasers which curve in the direction of the player. The two faces on its sides must be destroyed first before the body becomes vulnerable.

Retrieved from "https://aleste.fandom.com/wiki/Mechanical_Cougar_Dennin?oldid=1186"
Community content is available under CC-BY-SA unless otherwise noted.