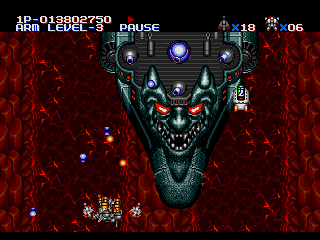 Kirirasame is a gigantic battleship with a demonic face on the front. Though it is never fought directly most of the stage is spent destroying its many turrets, which include small ones that shoot at the player, hatches which shower bullets below and large three-barreled cannons which shoot lasers. At the end you can destroy its two back engines.

Retrieved from "https://aleste.fandom.com/wiki/Kirirasame?oldid=1353"
Community content is available under CC-BY-SA unless otherwise noted.