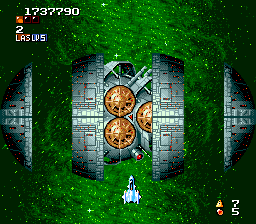 Janel appears as a large mechanical sphere. Its outer shell splits up to reveal the robotic core inside, which is the boss weak point. It attempts to ram the player then move to one of the sides, opening up to release five robotic drones which shoot at the player.

Retrieved from "https://aleste.fandom.com/wiki/Janel?oldid=1216"
Community content is available under CC-BY-SA unless otherwise noted.