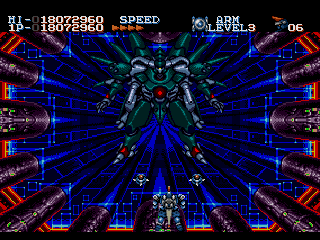 Iron Warrior is the final boss from Robo Aleste.

Astaros's personal vessel, this boss is a large green mecha made with unknown technology. The boss will go all out right off the bat, shooting either a barrage of lasers, bullets or missiles, as well as a salvo of fireballs. The boss is completely invulnerable, though after a while it will detach its head, which will then pursue the player while shooting lasers at it. After the head takes enough damage it reataches into the body and resumes it attack, with the boss being defeated after the detached head is defeated three times.

Retrieved from "https://aleste.fandom.com/wiki/Iron_Warrior?oldid=1188"
Community content is available under CC-BY-SA unless otherwise noted.