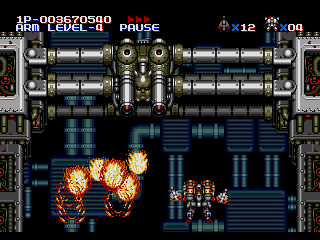 Hainoue appears as a pair of cannons with a face in the middle. It moves horizontally over a pair of metallic tubes, shooting streams of fire from the cannons and shooting bullet spreads at the player. Once the cannons are destroyed it will fire more bullets and faster.

Retrieved from "https://aleste.fandom.com/wiki/Hainoue?oldid=1350"
Community content is available under CC-BY-SA unless otherwise noted.