Gaizel (ガイゼル) is the main villain and final boss from Aleste 2. He is the current Emperor of the Vegant, leading their attack against Earth in 2039 AD.

The final fight with Gaizel is separated into two phases. During the first phase, you fight Gaizel's battleship, which stays stationery in the middle of the screen. He will attack by shooting thin lasers forward which turn 90 degrees when horizontally oriented with the player (much like the lasers used by the enemies in the final stage). He will also shoot a pair of fast blue balls which will home unto the player.

Upon taking enough damage the ship will explode, but soon various vines will come out of the ship, and a blinking hologram of Gaizel will appear. This hologram will relentlessly pursue the player, alternating between firing a ball aimed at the player, attempting a flying kick and shoot a bullet spread. The player has to defeat the hologram in order to finish off Gaizel for good. 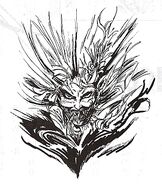 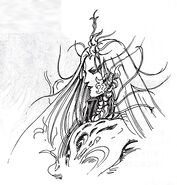 Phase 2
Add a photo to this gallery
Retrieved from "https://aleste.fandom.com/wiki/Gaizel?oldid=1426"
Community content is available under CC-BY-SA unless otherwise noted.