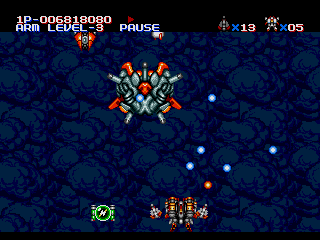 Flying Core (unofficial name) is the fourth mid-boss from M.U.S.H.A..

This mid-boss appears as a round floating machine, which is initially carried over by two smaller drones. It flies around the screen while shooting a barrage of bullets at the player, stopping and firing multiple lasers when the player moves in front of it.

Retrieved from "https://aleste.fandom.com/wiki/Flying_Core?oldid=1266"
Community content is available under CC-BY-SA unless otherwise noted.