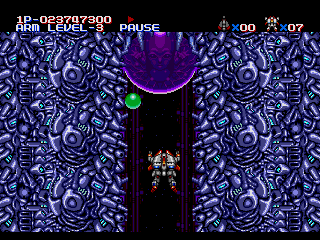 Ayano Kouji is the final boss from M.U.S.H.A..

Ayano Kouji is the core of Dire 51. In the first phase of the fight a giant mechanical contraption appears, which constantly releases floating guns to the sides which shoot lasers. The main weak spot is on the middle, but it is protected by a box which moves on a rail in front of it and follows the player's movement.

Once the defense machine is destroyed the player moves onto a corridor to face the core itself. At first it is invulnerable, bouncing around the screen while two green cores on the sides shoot at the player. Once the green cores are destroyed a robotic unit in the back will carry the main core into a thight corridor, which will spit green balls into the walls, which turn into claws to crush the player.

Add a photo to this gallery
Retrieved from "https://aleste.fandom.com/wiki/Ayano_Kouji?oldid=1161"
Community content is available under CC-BY-SA unless otherwise noted.