Aleste Gaiden (アレスタ外伝) is a vertical shoot 'em up video game developed by Compile in 1989. It was released onto MSX2 in Japan only. It was originally released as part of the Disc Station Special Vol. 4. As it's title implies, it is a spin-off which retells the story of the first game in a different setting.

This is another dimension of Earth's story that happened when Ray Waizen, a pilot of the World Integrated Defense Mechanism, boarded Aleste and was fighting DIA51 and the malformed plants it created.

Since the occurrence of a huge earthquake caused by a single meteor, strange incidents have occurred here in Muromachi City. In the vicinity of Muromachi Castle, which has the Idea 51, a contributor who maintains the environment of Muromachi City, people who were normal until yesterday suddenly began to rampage. Muromachi City is a bioengineered city where many people have cyborged parts of the body or the whole body, and when such people began to rampage, even the fully armed city cops struggled to cope.

After crushing them, a survey of their bodies revealed surprising facts. The central part of their brain was hollow and the nervous tissue was shredded. It's as if something got into the brain and manipulated the human inside... At the same time, strange rumors were circulating in Muromachi City. It is said that someone wearing a strange mask was defeating the people who have turned into mobs one after another. Some who witnessed the person said it looked like a special assassin called "Ninja" as seen in old tales. Also, it seems that the person called himself "Aleste".

What is happening in Muromachi City now? What is manipulating people? And what is the identity of the mysterious person who calls himself "Aleste"? Now, Muromachi City was about to be swallowed up in the midst of a great storm.

Aleste Gaiden is a vertically-scrolling shoot 'em up where the player controls a armored warrior on foot instead of a spaceship. Gameplay is much simplified from previous titles, with the player having only a frontal attack which varies depending on the currently equipped weapon and a jumped maneuver used to cross over holes and chasms. They player can also get equipped with shadow doubles which trail the player's movement and fire along with the player.

Note: Names in italic are unofficial. 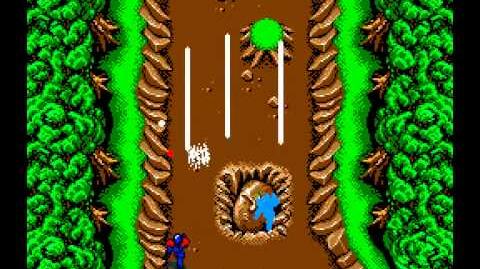